Phytophthora ramorumis one of an increasing number of Phytophthorastrains active in the UK where it attacks and kills larch, beech and other species.  A relatively recent arrival in the UK, it is having devastating effects on oak populations in North America and Europe.  Symptoms include bleeding cankers on the trunk and dieback of foliage leading to tree death.

At present, the principal victim in the UK is Japanese larch and millions have already been felled in locations as far apart as Cornwall and Argyll in unsuccessful attempts to prevent spread.

The problem that seems not to be recognised in Forestry Commission briefings is that Phytophthora ramorumis highly mobile and, by the time the symptoms have appeared, the infection has already spread further, rendering clearance futile as a control mechanism.  Thus, the initial clearances in Cornwall and Devon manifestly failed to prevent the onward spread up the West coast into Wales and, ultimately, Scotland. Rhododendron is an important host and carrier – and this is another non-native plant issue affecting the UK environment.  Millions more larches are now threatened nationwide, with special problems in Scotland, as shown on the map below.

We have not yet seen the full impact of Phytophthora ramorumin the UK.  A wide range of ornamental plants are also affected, as is bilberry, an important ground cover plant.  Worse is to come as a small number of cases of infected Sitka spruce have been found.  The greatest danger is, however, to mature oak.  Cases of infection of sessile and pedunculate oak have been confirmed in the UK and it is not reassuring that the infected trees were all standing next to heavily-infected Rhododendron bushes and therefore exposed to heavy inoculum pressure. 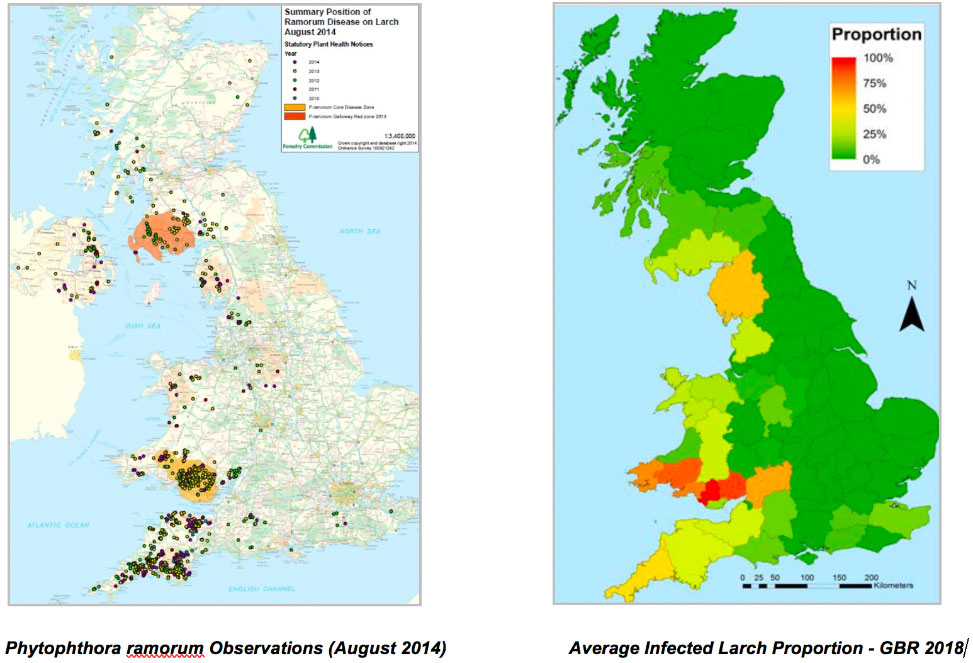